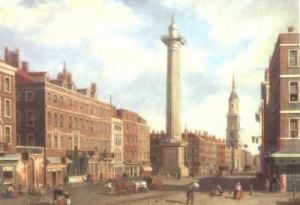 In his book ‘London: A Social History’, Roy Porter describes Eighteenth Century London as “the wonder city”. The capital’s story was one of extraordinary success and of an unprecedented creation of wealth.

Largely because of Britain’s increasing number of colonies, international trade grew at a remarkable pace and London became not only the successful centre of this commercial traffic but also acted as the nucleus for numerous manufacturers of goods to be sold at home and abroad. This was also due in part to the Country’s comparatively stable and democratic Government and a successful marriage between merchants, traders and financiers.

Whereas the population of many European cities remained unchanged throughout the century (the population of Paris stayed at about 500,000) the population of London rose from 575,000 in 1700 to 900,000 in 1801 (the time of the first British census). Also, unlike its European counterparts, a far greater percentage of England’s population (10%) lived in the capital and many of those who did not, had their lives shaped by it. As Daniel Defoe put it,“This whole Kingdom are employed to furnish something, and I may add, the best of everything, to supply the city of London with provisions”. 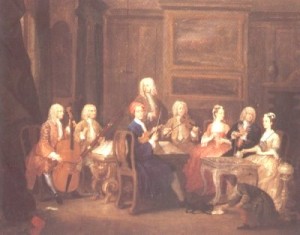 London spelt demand. It paid good prices for provincial produce and high wages to attract those at the top of their professions. This made London an expensive place to live, but this mattered little while it continued to expand and prosper. The more people that London attracted the greater the demand for every conceivable product from food, clothing and housing to education and transport.
London attracted many visitors from outlying areas who went there to visit theatres, opera houses, pleasure gardens and to purchase quality goods from the newly opened prestigious shops.  There were textiles and lace in Paternoster Row,  hosiery in Cordwainer Street, fine books in Pall Mall and luxuries of all kinds in New Bond Street. The shops opened for long hours, usually 8 a.m. to 10 p.m. and even the smallest of purchases would be delivered.  Communications improved as the stagecoach businesses thrived and by 1705 London was ‘linked’ by stagecoach to over 180 towns. With the strong competition between rival companies journey times were cut, with London to Bristol taking two days in 1754 but the ‘Flying Coaches’ cutting this to just twelve hours by 1800.

Between the two extremes of Lord and Labourer lay the solid ‘middle classes’ such as master craftsmen, merchants, joiners, tailors, brewers, tutors, clothiers and professionals all of whose services became increasingly in demand. As they became financially better off they increasingly had more time to spend on leisure activities. The focus of much of this Eighteenth Century leisure time was music. 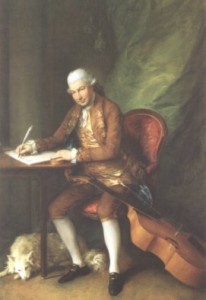 People therefore went to opera houses, theatres, music clubs, pleasure gardens and churches to hear music and they also wanted to play it for themselves, leading to an exceptional increase in the number of amateur musicians. Families all over the country took up singing or learnt to play an instrument – the flute, oboe, violin and harpsichord being the most popular.

Thus England (not just London) became the vibrant musical centre of Europe which naturally attracted many immigrant musicians and composers seeking fame and fortune such as Abel, J.C. Bach, Geminiani, Pepusch, and of course that colossus of the Eighteenth Century musical world, George Frideric Handel.

Thus the stage was set for some of the greatest composers of their day to excel in their art. Although it is Handel’s name that is most remembered from this era, many other composers became much-loved household names. For example, while Handel dominated the Opera House, Thomas Arne drew appreciative crowds at theatres and the Pleasure Gardens. Families played William Boyce’s Trio Sonatas when at home and admired the anthems of Maurice Greene and the organ voluntaries of John Stanley when they went to church. They heard, loved and delighted in a wealth of English Music much of which, today, remains comparatively unknown.

One thought on “Historical Background”