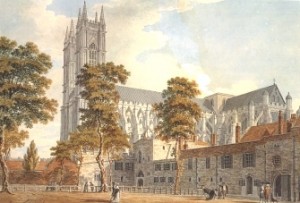 William Croft was born into a wealthy and ancient family at the Manor House, Nether Ettington in Warwickshire and was baptised on 30th December, 1678.
He was educated as a ‘Child of the Chapel Royal’ where he was taught, by direction and example, by the composer John Blow (1649-1708). He remained at the Chapel as a ‘Child’ until he was twenty years old – something that only happened to the most talented of pupils.
By the age of 19 he showed his obvious interest in composition by copying many extracts from cantatas by Scarlatti, Carissimi and others into his own manuscript book.

Having left the Chapel in late 1698 he rejoined it just under two years later (in July 1700) as a ‘Gentleman’ organist – the post being shared with the composer Jeremiah Clarke. As the musical historian John Hawkins said in 1776, “the bent of his genius led him to church music”. This two-year gap was to be the only time in his life when he held no church position and it was during this period that his first works were published. These were all secular and included songs, suites for harpsichord, sonatas for the violin, sonatas for two recorders, four sets of theatre ‘ayres’ for strings and incidental music for plays at the Drury Lane Theatre.
In all probability, also in 1700, Croft became organist at St. Anne’s Church, Soho where a new organ had just been built. 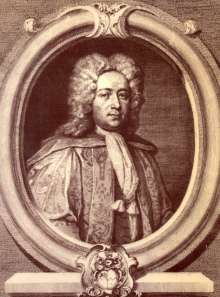 When, in 1707, Jeremiah Clarke committed suicide, distracted by, “a violent and hopeless passion for a very beautiful lady of a rank superior to his own”, Croft became composer and Master of the Children at the Chapel Royal.
When, a year later John Blow died, Croft succeeded him as organist of Westminster Abbey. From this point onwards Croft’s compositions were solely of a religious nature.

Croft took the Oxford degree of DMus in July 1713 submitting his Musicus Apparatus Academicus comprising two odes for solo voices, choir and orchestra, i) “With noise of Cannon”, and ii) “Laurus cruentas” which were performed at the Oxford Sheldonian Theatre. In 1715 Croft had the work attractively printed with a preface stating, “I must always acknowledge the obligations I have to the Famous University for the favourable reception they there met with”.
“With noise of Cannon”, considered to be one of his major works, is a celebration of the peace of Utrecht (words by Joseph Trapp) and shows Croft moving away from the Restoration period musical style of Purcell and Blow towards the style of the new Baroque era.
In his post at the Chapel Royal he composed many works for special occasions, such as the funeral of Queen Anne and the coronation of George I, both in 1714.
In 1715 Croft’s salary as Master of the Children was raised by £80 a year for him to teach reading, writing and arithmetic as well as music and in addition to composing and organ playing. 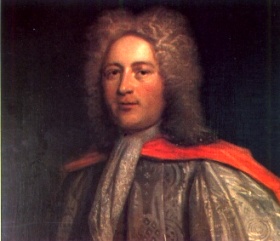 1724 saw the appearance of his principal and most famous work; his two-volume collection of church music entitled Musica Sacra, containing 31 anthems and the Burial Service. In the preface he explained how it was the first collection of anthems to be printed in score format. It is largely through this publication that Croft’s reputation has lasted over the centuries. Many believe that the anthem ‘O Lord, rebuke me not’ is one of his finest. The musical historian Charles Burney, writing in his ‘General History of Music’ published in 1789 described it as follows: “It is one of the most masterly and grand compositions, of the kind, which our church or any other church, can boast…. The last chorus, which is a double figure upon two fine subjects, is equally well supported and masterly…..and lastly, in the Amen, there is a spirit and design, which manifest both genius and learning”.
Writing about the Burial Service (which has been sung at every state funeral since it was composed – including that of Her Majesty Queen Elizabeth the Queen Mother on 9th April 2002 and The Right Honourable The Baroness Thatcher of Kesteven (Margaret Thatcher) on 17th April 2013) Croft mentions his indebtedness to Purcell: “In that [Burial] service there is one verse composed by my predecessor, the famous Mr. Henry Purcell, to which, in justice to his memory, his name is applied. The reason why I did not compose that verse anew (so as to render the whole service entirely of my own composition) is obvious to every Artist; in the rest of that service composed by me, I have endeavoured as near as I could, to imitate that great master and celebrated composer, whose name will for ever stand high in the rank of those who have laboured to improve the English style…”.
The verse by Purcell is the one beginning, “Thou knowest, Lord”.

Croft died on 14th August, 1727 in the town of Bath where he had gone to take the waters – presumably to try to remedy a deterioration in health. He was buried in the north aisle of Westminster Abbey close to Purcell and Blow. A monument was built there in his honour.

In his ‘General History of Music’ (1789) the musical historian Charles Burney wrote of Croft as having, “gone through life in one even tenor of professional activity and propriety of conduct. We hear of no illiberal traits of envy, malevolence, or insolence….the universal respect he obtained from his talents and eminence in the profession seems to have blended with personal affection”.