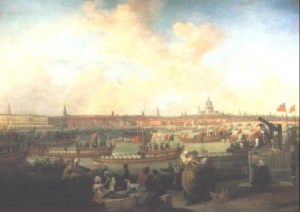 Capel Bond was born in Gloucester in 1730, being baptised on 14th December. His father, William Bond, was a bookseller in the town. The young composer was probably educated at the Crypt School run by his uncle, the Reverend Daniel Bond and at the age of 12 was apprenticed to Martin Smith, Gloucester’s Cathedral organist.

At the age of 19 he moved to Coventry to take up his post as organist of St. Michael and All Angels and three years later in Easter 1752 became organist of Holy Trinity, Coventry.
St. Michael and All Angels was the second largest parish church in England and was later to become the city’s cathedral. He held both these posts until his death in 1790.

Bond did a great deal for music in Coventry by organising subscription concerts and expanding the local Musical Society to become instrumental as well as choral. He organised a music festival at which he conducted the Messiah and Samson and was responsible for founding a music festival in Birmingham – conducting its first one in 1768.

Bond’s only surviving music is his Six Concertos in Seven Parts (London, 1766) and his Six Anthems in Score (London, 1769). They must have been well received as the Anthems ran to six editions and the Concertos to two editions. Subscriptions for the latter include the composer John Valentine, Handel’s librettist Charles Jennens (who requested six sets) and many musical societies from all over the country. Both sets of music went on sale in London and Coventry. The first concerto, with solo trumpet, probably dates back to 1754 and was performed by “Mr. Adcock, the first trumpet of the Vauxhall Gardens London” in that year and also at the 1768 Birmingham festival.

In recognition of his ‘superior merit and regular attendance’ as organist at Holy Trinity he was awarded a £10 per annum increase to his £30 annual salary. It was about this time that, presumably due to some deterioration in health, his musical activities lessened and he made his will. However, he survived another nine years and died on 14th February 1790. He was buried at St. Bartholomew’s Church, Binley, Coventry – his tombstone reads:

40 years organist of the Churches

of St Michael and Holy Trinity in

He [wa]s an eminent musician

[an]d steady in his friendships

[exempl]ary in the constant practice

[of his Ch]ristian and social duties