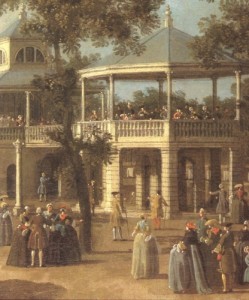 The orchestra at Vauxhall Gardens painted by Antonio Canaletto (1697-1768)

Unfortunately, precious little is known about John Hebden’s life. He was baptised on 21st July 1712 at Spofforth, near Harrogate in Yorkshire, the son of ‘John Hebdin’ of Plompton. He was orphaned when young but was fortunate enough to receive an excellent education, including musical tuition.

He lived most of his life in York and it was there on 17th June 1732 that he married Mary Priestland. They had a child, John, but unfortunately Mary died while John was still young. Years later Hebden bequeathed money to be held in trust for his “ne’er do well” son.

Hebden was a professional bassoonist, gamba player and ‘cellist and in the 1730s composed music for a small local professional orchestra containing “all the best Hands in Town”. They gave many concerts at the York Assembly Rooms which were designed by Richard Boyle, 3rd Earl of Burlington who was a patron to Handel. 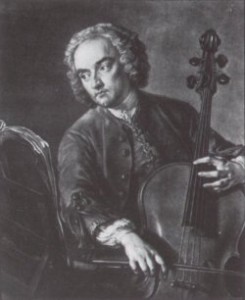 His ‘six concertos for strings’ were undoubtedly highly thought of as their fame spread to Germany. The impressive list of subscribers to these works shows the high esteem in which Hebden was held by his musical contemporaries. The list includes fellow composers Arne, Boyce, Sammartini and Geminiani as well as the Earl and Countess of Burlington, the Devil and the Globe music club taverns in London, plus numerous organists and amateur and professional musicians.

His only surviving works are the 6 concertos for strings, op. 2 mentioned above and his 6 solos for Flute and Harpsichord.

(Unfortunately Hebden’s excellent Solos for Flute and Harpsichord have never been recorded).